← more from
Earthy Records
Get fresh music recommendations delivered to your inbox every Friday.
We've updated our Terms of Use. You can review the changes here.

by The Living Earth Show and Danny Clay 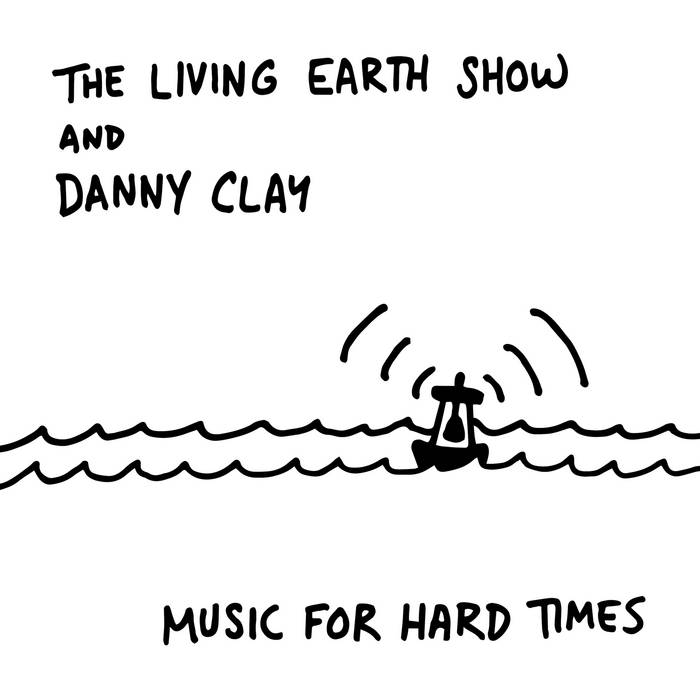 In March 2020, when the composer Danny Clay wrote a series of eight Calming Strategies, his and other working musicians’ lives all over the world had suddenly come to a surreal and terrifying standstill. Clay had begun work on the Strategies trying to answer a seemingly simple question: how can composers and conservatory-trained instrumentalists use their specialized skills to help people feel better? And if the music they’re playing makes musicians feel something as they’re playing it, is there a way to transmit that same feeling to the listener?

The test rig for these strategies were Clay’s longtime collaborators Andy Meyerson and Travis Andrews, of the adventurous electric guitar and percussion duo The Living Earth Show. Andy and Travis spent the following weeks recording the 16 hours of raw material that became Music For Hard Times Volume 1. In the process, they helped to refine Clay’s vision and notation, as well as to establish a timbral and gestural palette for subsequent realizations of the work. Those realizations would follow shortly. That winter, the duo enlisted the San Francisco Girls’ Chorus and students from the San Francisco Conservatory, two institutions eager to look beyond what had by then become rote multi-tracked online performances of standard repertoire. Here was a project that allowed students room to experiment with process, collaborate with each other remotely, and create something new, reframing classical music’s traditional emphasis on faithful execution of unchanging scores. Music For Hard Times Volume 2 emerged as the collective product of hundreds of hours of recordings by these scattered forces.

Clay constructed Volume 2 like a generative collage or puzzle, first pairing sounds he felt related to each other, then layering them, building outward from there. Once a track began to reveal its overall shape, The Living Earth Show recorded still more material, but this time in a supporting role, adding layers of musical substrate to fill out textures and add harmonic richness. The duo also acted as stewards of the piece’s oral tradition, coaching and guiding the students in their interpretations.

In contrast to Volume 1, the recordings from the chorus members and conservatory instrumentalists range broadly not only over instrumental timbres, but also sound qualities, recording techniques, and acoustic environments. In some contexts this could be considered undesirable, if not downright unworkable, especially when recording so many tracks in isolation for a studio album. Clay deftly turned these gulfs in production values into yet another musical parameter to be considered, toyed with, and emotionally charged. Incidental noises, environmental sounds, and intrusions that could be considered “imperfections” were encouraged. A solo cello opens Volume 2’s Epilogue on a homespun, even slightly crude A; there’s no vibrato on it, barely any reverb. In contrast, the long, drawn-out cymbal rolls against a beatific choral background on Volume 2 / Part 6 sound lush, detailed, expensive. In combining these elements, the finished product subverts our idea of what constitutes a “good recording”; hearing a sound recorded at a specific quality in a particular acoustic transforms it into an artifact of time and place. Volume 2 is essentially a catalogue of individual spaces united in time—in many cases, recordings made literally during the same hours of January 2021, all over the world, then Dropbox-ed to Clay’s home studio in San Francisco.

The title acknowledges that times were hard in general, but hard for whom specifically? The music itself bears neither a geopolitical nor a personal message. Rather, it serves a social purpose—communal self-care. In quiet rebuke to the sleek, corporate rebranding of “self-care” that has taken place over the past decade, the Calming Strategies invite us not to buy something, but to make something for each other and for ourselves. And what, exactly, is being made? The original intention was to fashion a tool for musicians, and in turn, a balm for listeners. But the project proved to be much more than this. As they recorded their initial realizations, Andy and Travis realized that the Calming Strategies were improving their own senses of well-being, too. It was not merely the distraction of having a project, which felt somehow centering, but the specific qualities of the project itself. At times,The Strategies themselves ask players to use their own emotional responses as a gauge, becoming meditative exercises in the process. Strategy #1, for instance, is meant to last “slightly longer than you are comfortable, or until you feel it has made a significant effect on you”; #4 suggests adding “a small sound to your environment, to remind it you’re still there.”

These open-ended text instructions trace their roots back to the Fluxus movement, Pauline Oliveros’s Tuning Meditations, and Brian Eno’s Oblique Strategies. But from the outset, Clay was concerned less with conceptual rigor or novelty and more with producing a reliably beautiful result—and it is through the uncomplicated pleasures of making and listening to beautiful sounds that Music for Hard Times succeeds. There’s a clear timbral and harmonic palette that binds Volumes 1 & 2 together. Especially in its larger choral-orchestral realization, there’s a ticklish, intimate level of detail to the sounds, an enveloping coziness that draws the listener inward. Clay plays games with the listener’s sense of space and distance, bringing a producer’s keen ear to the physical placement of each individual sample. In Part 1, a trio of intertwining melodies on flutes and cellos, close and detailed enough that they could be in the room with you, suddenly zooms out to a wide landscape of choral harmonies. These kinds of juxtapositions give the music a kind of perspective, and an immersive, three-dimensional depth. As we listen, we’re lifted out of our claustrophobic quarantine apartments and into the wider world, alongside the musicians themselves.

The one-to-one emotional relationship that Clay and the Living Earth Show originally set out to investigate is rare in pure music (that is, music without lyrics), because it’s an abstract language. There’s a fine line between giving people agency to experience the Calming Strategies for themselves and nudging them in the direction of a musical narrative. That’s where Clay’s confident compositional hand becomes apparent. As befits the communal nature of the work, his approach is non-invasive, sublimating any sense of artist’s ego. Music For Hard Times rearranges and complicates the order of operations typically demanded by “composed” work, though it retains the core Classical Music triumvirate: composer, score, interpreters. But instead of producing a detailed document for performers to execute, Clay provides prompts, gathers responses, and then molds the result into just one of infinite possible “performances.” For this reason, it’s particularly educational to have two realizations to compare. Take Part 2 from both Volumes; both employ Strategy #5 (“Pick one object, or musical idea. Record as many variations on it as you can”). Volume 1’s treatment is a simple dialogue of a chord cycle in various inversions, while Volume 2’s choral version is more discursive, voices swooping in from different directions, each breaking down a different melodic cell. It would be difficult, if not impossible, to identify both as having roots in the same “score.”

In this openness, Music For Hard Times offers a gentle corrective to the academic conservatory training its musicians possess. Classical music has always been exclusive; in equipment and years of study, it costs hundreds of thousands of dollars for a bassoonist, say, to be able to play the opening of The Rite of Spring. Music For Hard Times extends the deep concern with accessibility that runs through most of Clay’s work. Though it was written with the virtuosi of The Living Earth Show in mind, it deepened its focus in moving beyond guitar and percussion. Adapting the Calming Strategies didn’t require changing them so much as broadening the language of the instructions to account for breath, so as to include singers and wind players, and the participation of students, amateur musicians, and even non-musicians. (A few of the strategies contain notated music, but all have options for non-music readers to contribute, as well.)

Though its creators describe Music For Hard Times as a “New Age” album, the music is more experimental and adventurous than one might expect from such a label. Instead of hovering in one place, existing as atmosphere or wallpaper, each track gradually articulates emotional peaks and valleys. These aren’t evident in the wording or notation of the strategies themselves, which shape the landscape by producing varied textures of music: melodies, sustained tones, loops, percussive events. Instead, these landscapes are the result of the composer’s shaping the performance after it has taken place. It’s not quite narrative—it’s more sculptural.

When composers speak of musical “architecture,” we’re usually talking about form: what happens, when, for how long. But Music For Hard Times becomes a more literal sort of architecture in our minds as we participate in it. It’s a well-considered space to exist in for a while, one which merits attention without demanding it. In this way, the whole process functions as a bridge, connecting conservatory training to instrumental practice to what it means to be a human being. People become artists because of a deep and often inexplicable urge to make things: for themselves, for each other, and for the wider world. As long as they are able to do this, they may continue to grow and thrive. The Calming Strategies, and this specific documentation of them, function above all as a record of artists doing exactly this during a memorably hard time.